by Mark Longstaff-Tyrrell · in Electrickery

I recently found the original Roland TR-808 service manual on archive.org and thought it would be fun to try and recreate some of the sounds. It’s an instrument with a tremendous history and featuring in an incredible number of records from the 1980s including Whitney Houston, Afrika Bambaataa, Dynamix II, The Jets, Marvin Gaye, A Guy Called Gerald… While there are plenty of 808 emulators available, these either use digital samples of an original machine or DSP emulations. How much more exiting to hear those sounds come out of a tangle of analogue electronics!

Looking at the circuit diagram I decided to have a go at building the cowbell. Not only is this arguably the most iconic sound of the 808, but it’s also quite straightforward. It also uses several key elements that are used in synthesised sounds and so is a good introduction to building electronic instruments. 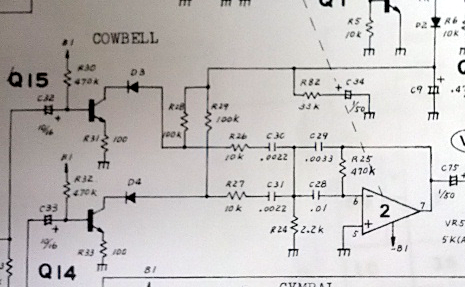 The 808 cowbell: how can something so simple bring joy to so many? 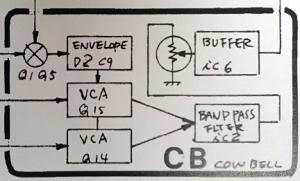 As you can see, it’s pretty easy to understand. It comprises two square wave oscillators each modulated with an envelope waveform, summed and filtered.

In the 808 the two square wave oscillators are formed by Schmitt inverters: 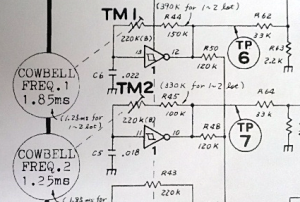 In this rebuild for convenience I’ve used a microcontroller to generate the square waves, and it also generates the 1ms trigger pulses required by the envelope generator. I’ve assumed the oscillators have a 1:1 mark/space ratio. I don’t have access to an original machine to check this.

The envelope generator produces the attack-decay waveform characteristic of percussion instruments. It’s driven by a 1ms square pulse which provides the energy to charge up capacitor C9 , while the diode prevents the capacitor network discharging back through the pulse source output. 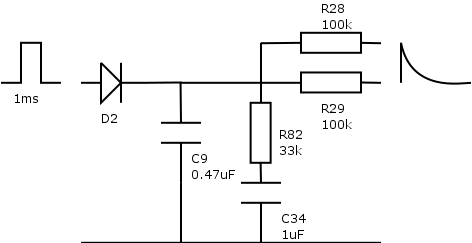 C9 then discharges through R28 and R29, giving a characteristic RC discharge curve. In addition the network of R82 and C34 add sustain, making the sound ring like a bell rather than abruptly stopping. Removing C34 makes it sound like a bell with a sock in it.

The mixers, or voltage controlled amplifiers (VCAs), are described in the service manual and mix (multiplicatively) the envelope with each square wave: 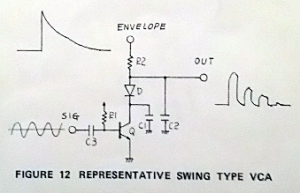 VCA diagram from the 808 service manual

The diode in series with the collector of the transistor isolates the VCA from the rest of the circuit when the envelope voltage falls below 0.7V. Omitting this diode causes the oscillator signal to continuously leak into the output.

By this point the output of the circuit sounds very much like the cowbell sound we’re looking for, but is still rich in harmonics from the square waves and sounds rather tinny. To give it a softer more natural sound the output of the two VCAs is passed through a bandpass filter, with (determined by experiment) a centre frequency of about 850Hz and a 3db bandwidth of about 200Hz (Q=4.25). The additive mixer shown in the block diagram is achieved simply by tying the outputs of C30 and C31 together. 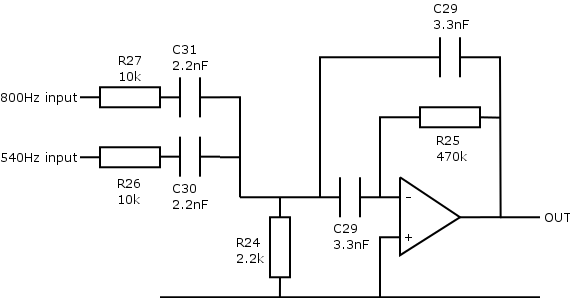 Finally the output of the BPF is buffered to line level and can then be fed into an amplifier. Here’s what the final cowbell looks like laid out on the breadboard:

It’s very easy to look at the circuit after the event and marvel at its simplicity. But the reason it became a classic sound was by this particular choice of oscillator frequencies, envelope shape and filter characteristics. It was also very much a product of its time – a brief period after the advent of integrated circuits but before the widespread availability of digital sampling hardware – when analogue synthesis was the only cost effective way to realise this. How easily it could have been different. Or how easily someone in a product meeting could have pointed out that, “hey, this sounds nothing like any sort of cowbell I’ve ever heard of”, and it might never have happened at all.

Despite its great age, the TR-808 is still a very sought after piece of equipment, fetching thousands of pounds on eBay. Recognising this, Roland released the TR-8 earlier this year which combines the sounds of the TR-808 and TR-909, as well as adding lots more flashing lights. Although the sounds are now all generated digitally, Roland acknowledge their analogue roots and have tried to preserve the nuances of the original instruments. Only time will tell if these new devices become as iconic as their predecessor.